What Does AI Offer Humankind?

This article is one of a series on the subject of Artificial Intelligence in mainstream enterprise computing.

Information technology in general and AI in particular serve as assistants to humankind in problem-solving and value creation. Humans can articulate problems and propose solutions beyond their capacity to effectively execute the solution. That is, some solutions require computational capacity that exceeds human capacity in scale, complexity, or both.

It is important to distinguish between scale and complexity. Humans are more than capable of adding a column of numbers. Machines are better at scale, making short work of calculating totals and averages of thousands or millions of values. Humans are still better than AI at certain kinds of complex tasks when those tasks are performed on a small scale.

Amazon’s Alexa, Apple’s Siri, and Google’s Assistant use a special kind of AI, Natural Language Processing (NLP), to recognize spoken commands and questions, and to provide synthetic replies. As complex as these tasks might be, they are not as complex as human conversation which considers not only words and grammar, but tone, and non-verbal and paraverbal cues. Human conversations take place in multiple simultaneous contexts. Words and grammar mean different things in different conversations. Thus far, NLP allows machines to process language. It does not yet enable them to converse as humans do, bringing feelings, perceptions, and imagination into the exchange of information. On the other hand, humans can converse with only a limited number of other humans at once at a limited pace. On the other hand, a machine’s ability to tirelessly process long streams of natural language, even more than one at a time, is limited only by the technical architecture of the hardware and software on which it is realized. 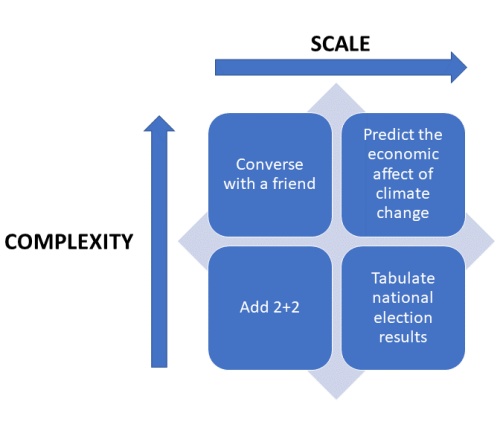 This is what makes widespread applications of AI possible – exponential increases in ubiquitous computing capacity. Computers which filled entire rooms in the 1960s were capable of little more than arithmetic at scale. Today, billions of mobile phones contain the computing capacity required to perform the complex tasks which we refer to as Artificial Intelligence. Except where human “wiring” remains the better tool for some kinds of problem-solving, machines can outperform humans in both scale and complexity. This may seem obvious, but it is exactly the point of all technology. The first sharpened stone was a better cutting instrument than human fingernails. This is what we humans do. We are toolmakers. We create things that allow us to solve problems and create value better, faster, and more reliably than we can with our innate capacities. AI is just a new tool. It may be an exceptionally interesting tool because, more than a sharpened stone, we see a bit of ourselves reflected in it.

We will be delighted to hear from you.

We look forward to knowing more about you and how we can make a very
positive difference for you.

Find out more or adjust your settings.

This website uses cookies so that we can provide you with the best user experience possible. Cookie information is stored in your browser and performs functions such as recognising you when you return to our website and helping our team to understand which sections of the website you find most interesting and useful.

Strictly Necessary Cookie should be enabled at all times so that we can save your preferences for cookie settings.

If you disable this cookie, we will not be able to save your preferences. This means that every time you visit this website you will need to enable or disable cookies again.